The curious tale of the U-Bahn.

German Trains are, so goes the stereotype, the epitome of punctuality; every traveller’s dream. An efficient transportation system is a godsend to both the time-constrained, sight-seeing tourist, and the uninhibited traveller alike. On each of the 5 trips I have been on to Germany, I have been delighted with the ease in which the transport system operates; particularly the U-Bahn.

Many of Germany largest cities have their own underground rail networks. Like the London Underground and the Paris Metro, the U-Bahn systems serve the centre of the city as well as running partially overground services to surrounding areas and outlying track points. Brian Purcell, from Brian’s Guide to Getting Around Germany, writes extensively about the regularity of the U-Bahn system and the other forms of transport in the country; S-Bahn, Straßenbahn, Stadtbahn, and Buses. In Nürnberg, the U-Bahn runs every few minutes but there are many ways to find out the exact times, including visiting Brian’s website, as well as the Verkehrsbund Großraum Nürnberg (VGN) website.

The curious case of the U-Bahn is that it is possible to travel without a ticket, relatively easily. If you are a traveller who does not mind taking 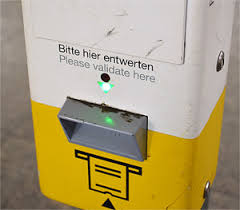 chances, then the U-Bahn could be an asset for saving money. However, should you be caught by one of the plain-clothes ticket inspectors, you can expect to pay up to €60 in on-the-spot fines. Some cities operating U-Bahn networks require you to validate your ticket before you use it. This means that your ticket is not valid until you get a time/date stamp from an ‘Entwerter’ machine (pictured right).

In Nürnberg, this is not an issue as the tickets come with a date and time on them, ready for instant use. 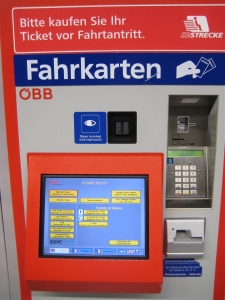 We bought four TagesTicketPlus (from a machine similar to this on the left) for the four days we were there which covered us for travel out to Erlangen as well
as inside the central area of Nürnberg. These are day tickets and cost €7.70 for an individual ticket (TagesTicketSolo) or €11.50 for up to 6 people. There are various different tickets pertaining to your origin and destination. See the VGN website for more details.

If you are willing to risk it though, there are no security barriers stopping you from entering a platform, as there are in London. This means that realistically, you could travel from station to station without a ticket. Germany operates on an ‘honour system’ which means that anyone flouting the rules is publicly humiliated as well as fined the €60. The inspectors have most likely heard all the excuses in the book, including “I don’t speak German” and “I am not from here”. The humiliation will only continue the longer you remain obstinate and refuse to pay the fine. In the time that we were in Nürnberg, we did not come across any inspectors, and we used the system extensively. As I said though, they are plain clothed and could be anywhere; they will not take your ignorance for an excuse and the humiliation of having to pay a fine in front of everyone else on the train with a valid ticket, plus the fine itself, is more than enough reason to buy the correct ticket, and validate it if you’re in a city that requires it.

Tickets which need validating will have an empty box with ‘bitte entwerten’ or ‘hier entwerten’ printed above it as pictured above. Stick it in the machine and you’re golden.

← How to name your Travel Blog.
Bryson “Down Under” →
Follow Global Individuals. on WordPress.com